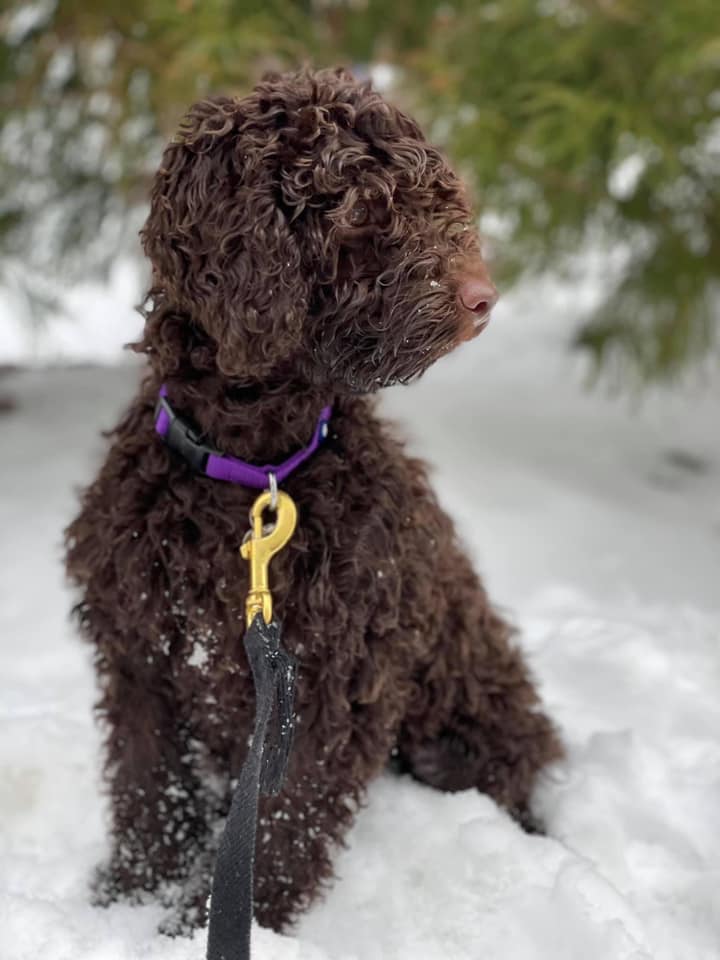 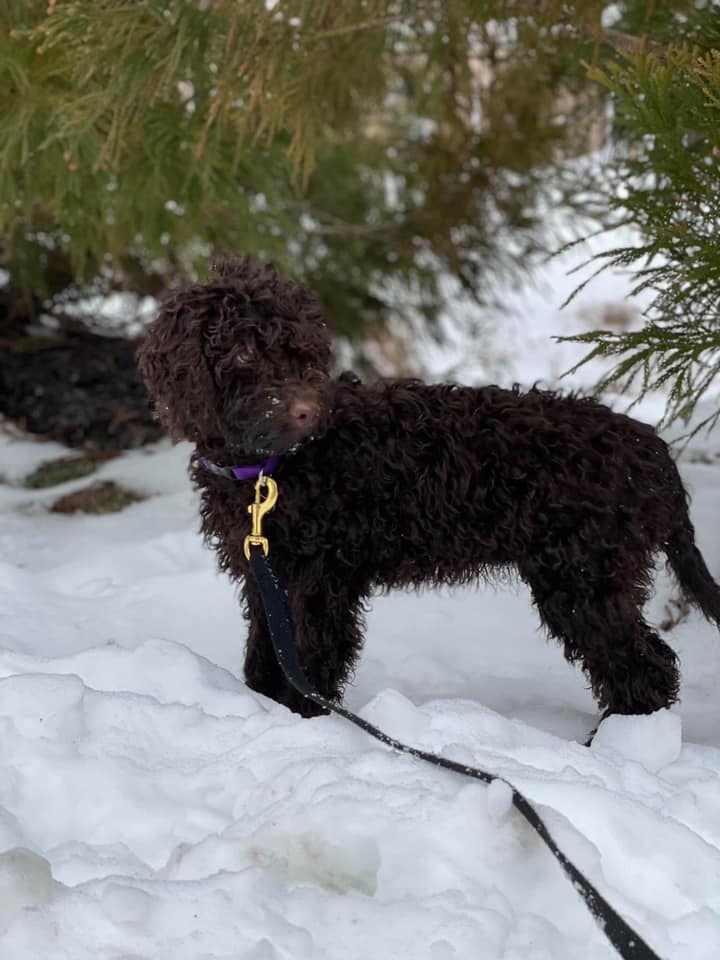 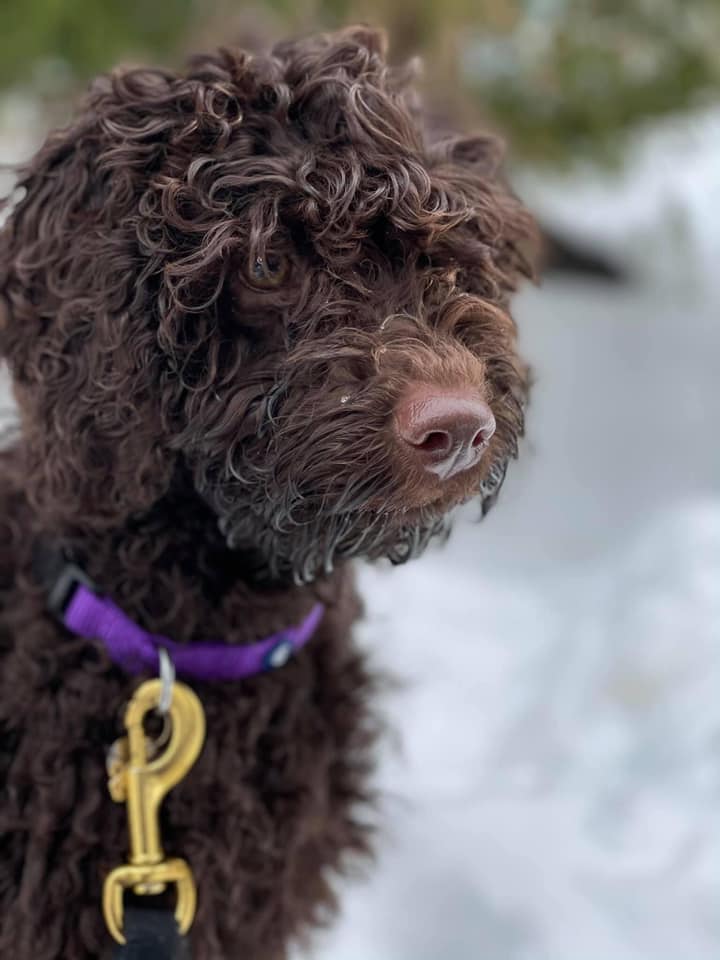 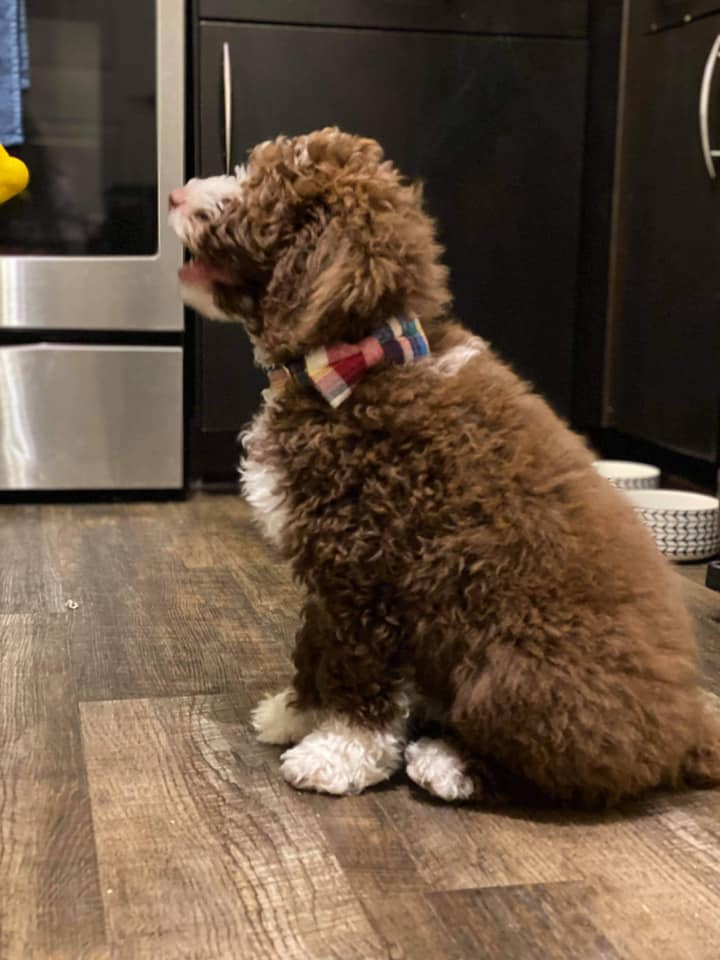 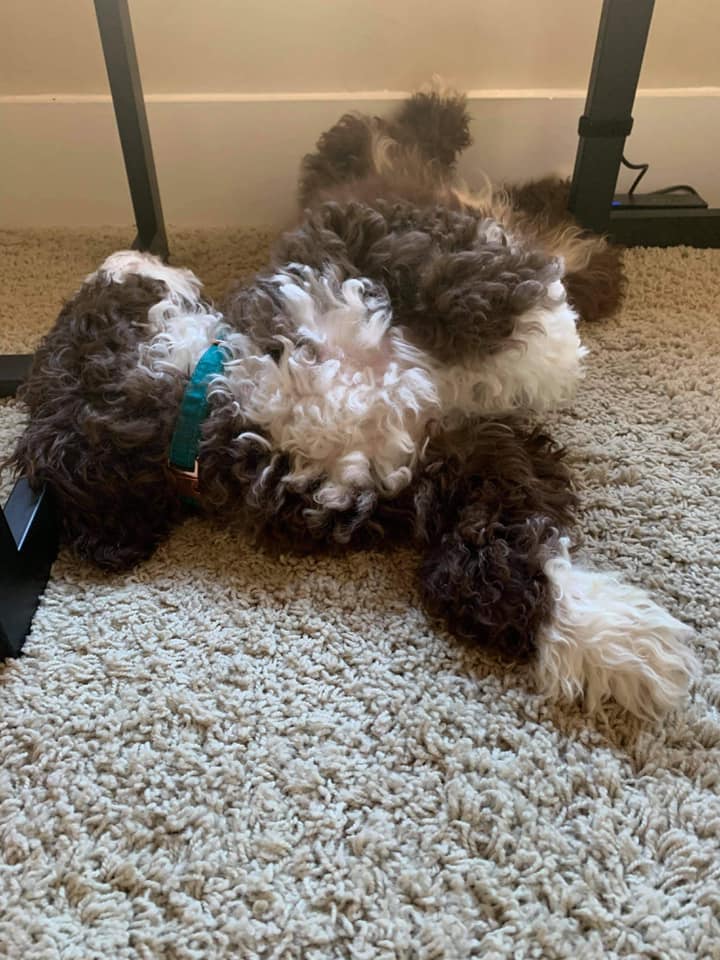 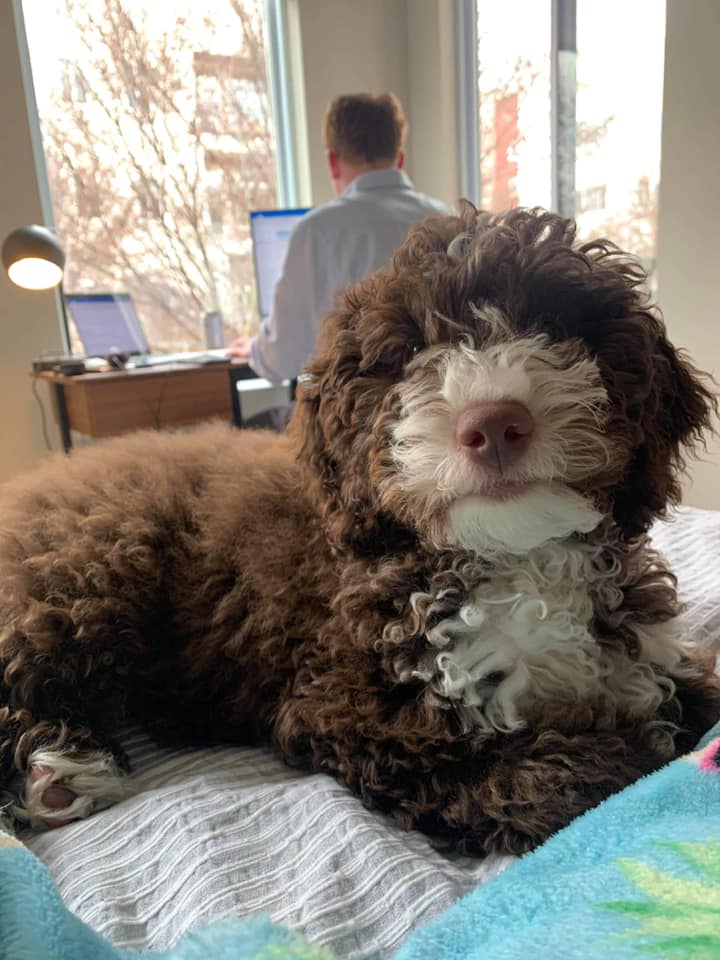 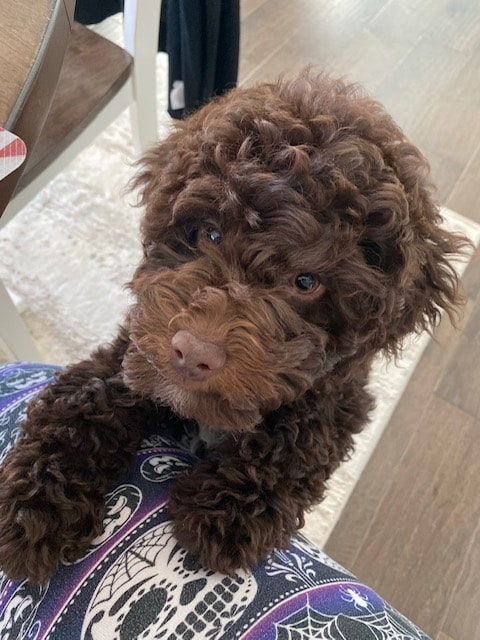 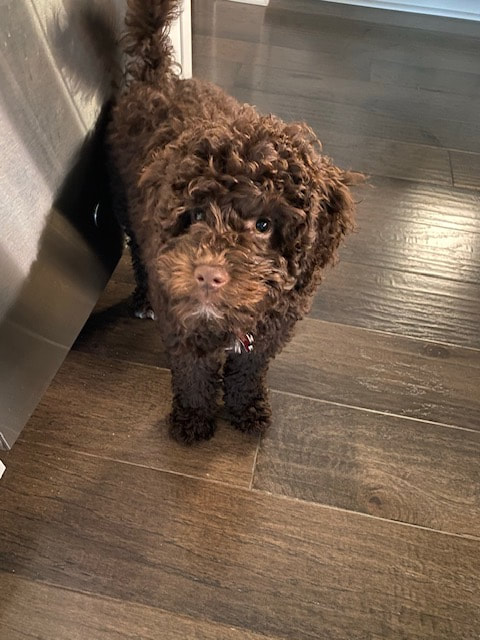 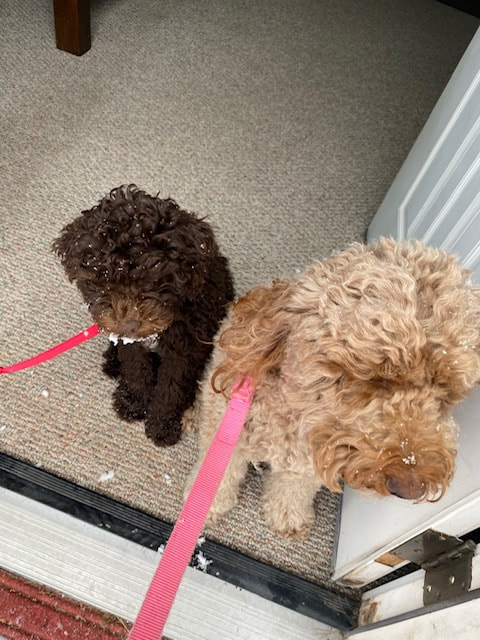 Bailey (turquoise collar girl) - Baliey is an adventurous, smart, and playful puppy.  She is always ready to have fun and is the most comical in the litter.  She is the larger of the two girls. She would do well in a household with kids as she will tire them out and they will tire her out.

Hershey (red collar boy) - Hershey thinks himself one of the big dogs and sometimes even gets a snap here and there to keep him in his place.  He wants to be a part of the pack and in the action.  He has a very kind heart. He is the second smallest in the litter. He would do well in a house with other dogs and people to love.

Rochelle (lilac collar girl) - Roechelle is a very calm and loving puppy.  She is overall super sweet.  She is very intelligent and is typically one of the first to figure something out.  She is the smallest in the litter. She would do well in a quieter household.

Cadbury (grey collar boy) - Cadbury is very human centric and always wants to be where the people are located.  He is the first to come up and greet me. He is the largest in the litter. He would do well in a household with a lot of people to give him lots of attention.

Toblerone (orange collar boy) - Toblerone is an easy going kind of dude.  He is calm and relaxed. He is not an attention seeker, but excited to see both dogs and humans alike. He is the second largest of the boys. He is the kind of dog that could do well in any environment.
BELLEAUWOOD'S ARWEN 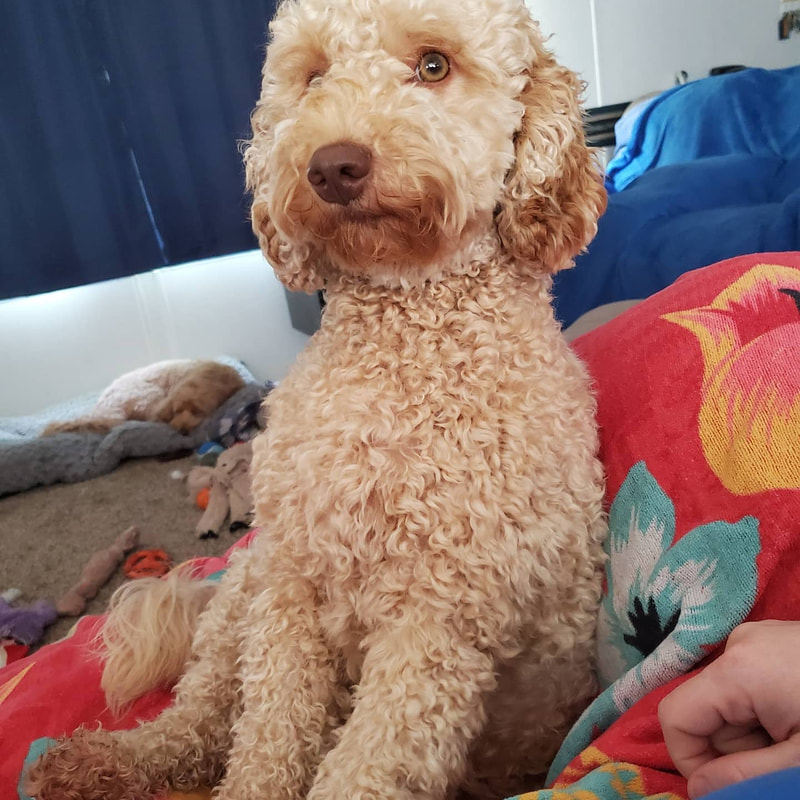 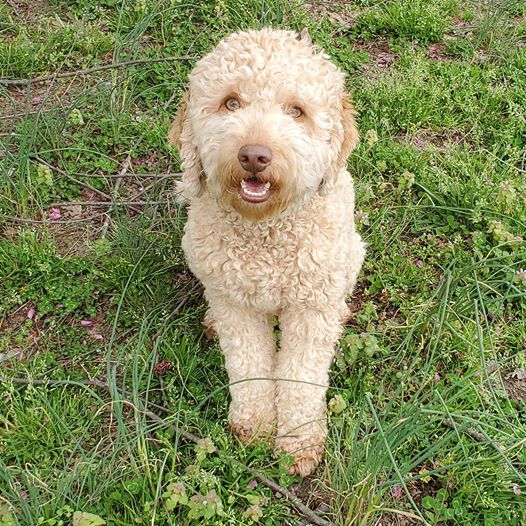 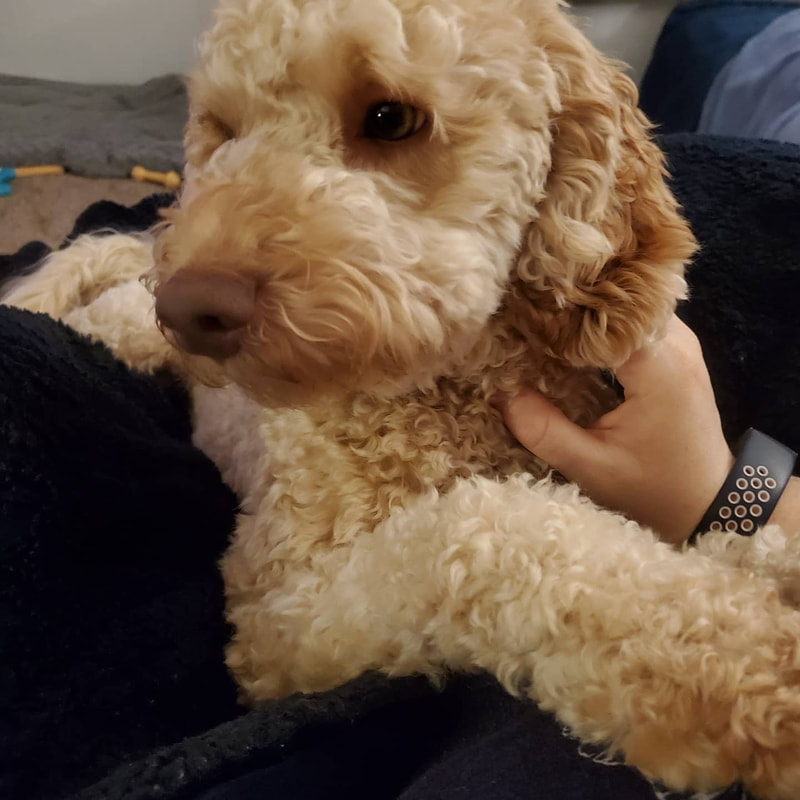 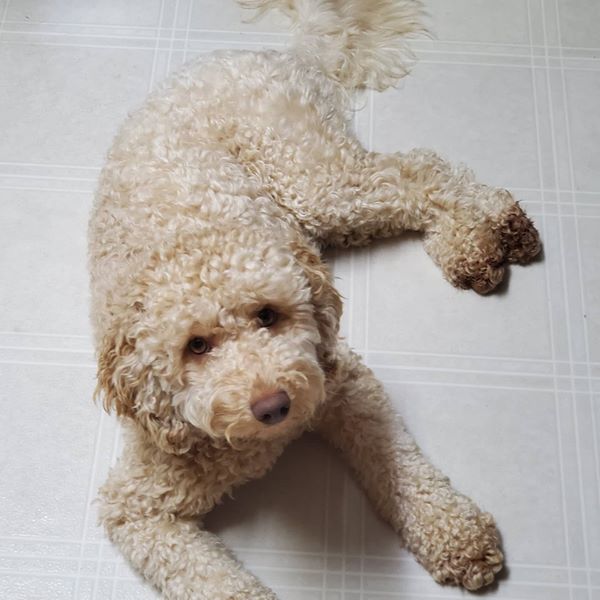 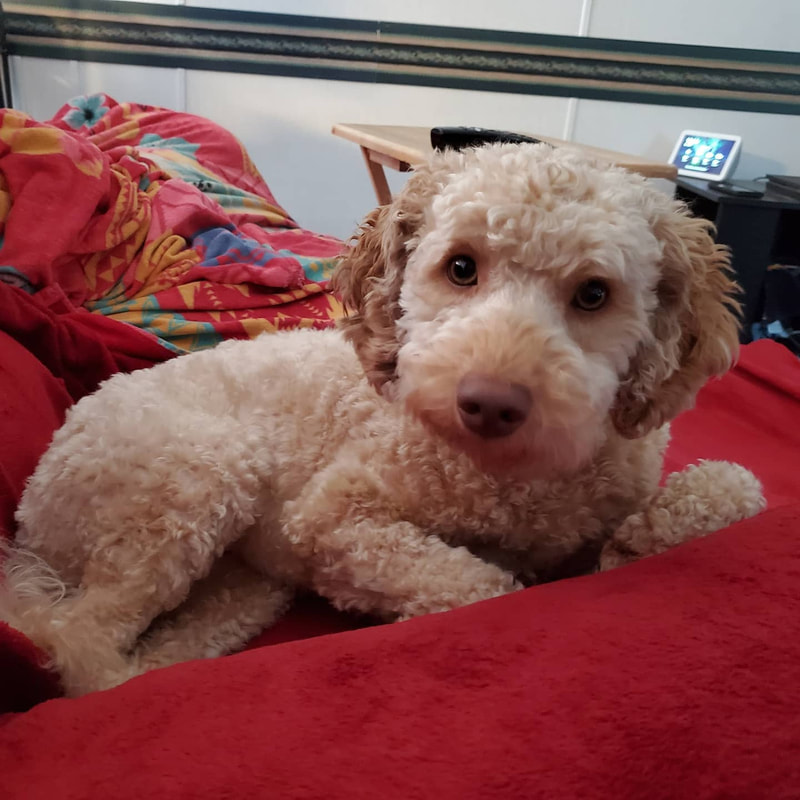 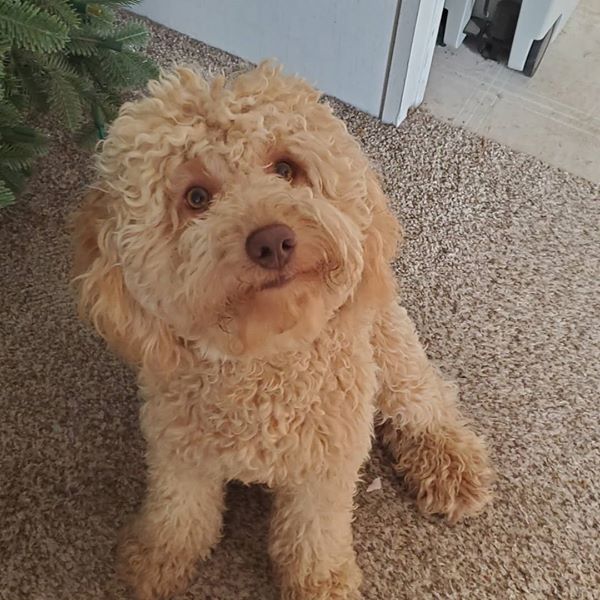 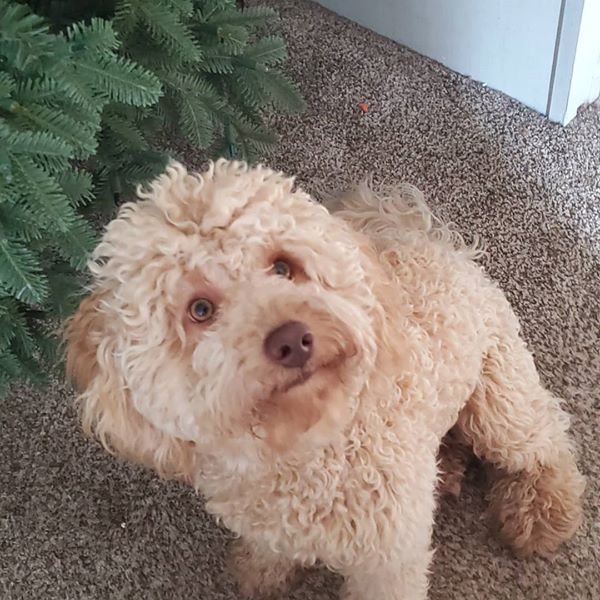 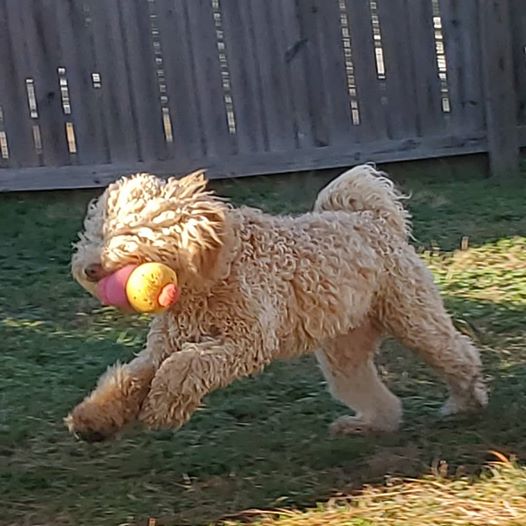 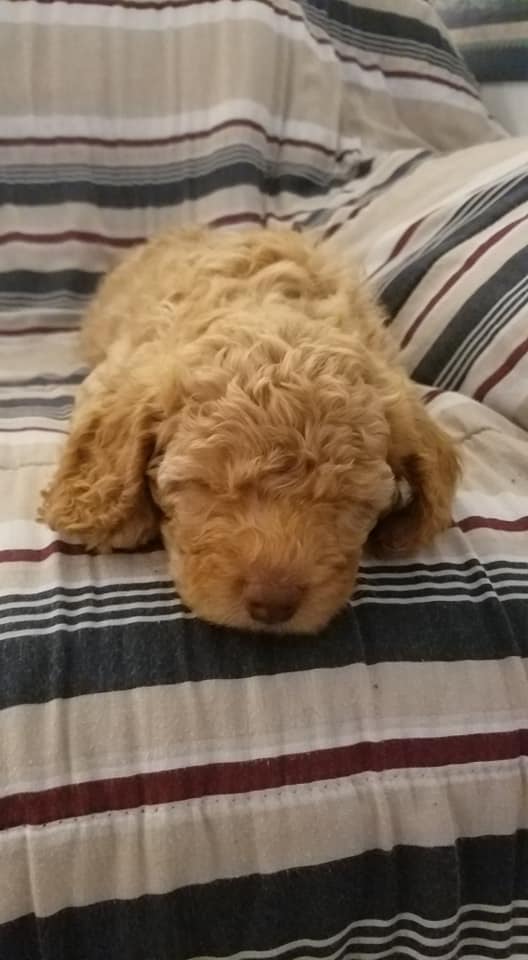 Arwen's Photo Album
BelleauWood's Arwen
Arwen is an apricot Multi-generational Australian Labradoodle bred and born at BelleauWood Labradoodles. Arwen is the daughter of Suzie and George Washington.  George's mom, Annie Lee, is the matriarch of our line.  Arwen was born on 02/12/2019 (littermate of Evelyn) and she is listed as Pumpkin from Suzie's 2019 Litter.  In the summer of 2019, she had a preliminary OFA testing and was classified as good condition,  We will retest her hips after 2 years of age.  In 2019, Arwen did a puppy class obtaining STAR certification and a confidence and agility class. We had planned to do a Good Canine Citizens class with her in 2020, but the class was canceled due to Covid-19.  Arwen is  well suited to therapy.  Once she is able to complete the Good Canine Citizenship class, we are planning on do community outreach with Arwen.  Hopefully visiting local assisted living facilities and schools once everything opens back up.  Arwen is the result of 8+ generations of Australian Labradoodle selection for top genetic, temperament, ad health.  She is a strong representation of our decade long breeding program and goals towards the perfect canine companion.  Arwen had a gorgeous chocolate litter in October 2020.  Arwen is part of Megan's Wolfpack.
BELLEAUWOOD'S JERICHO SKYWALKER 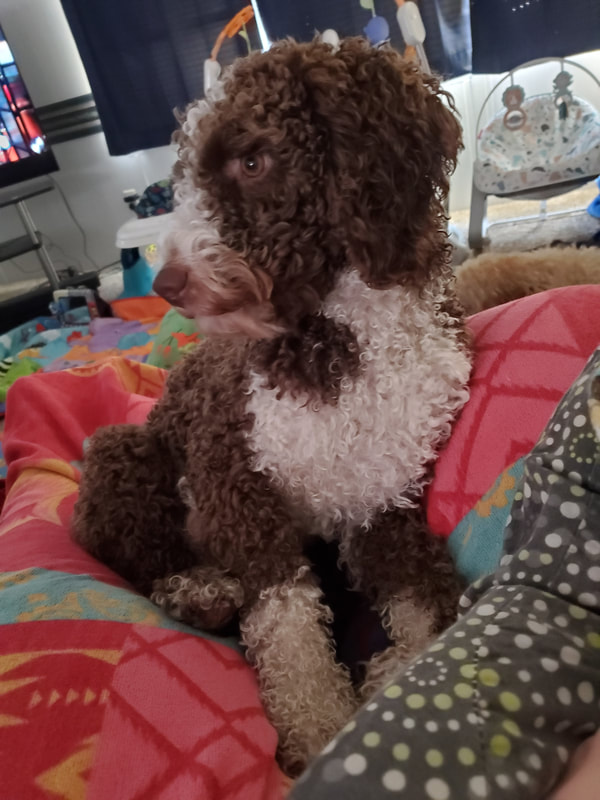 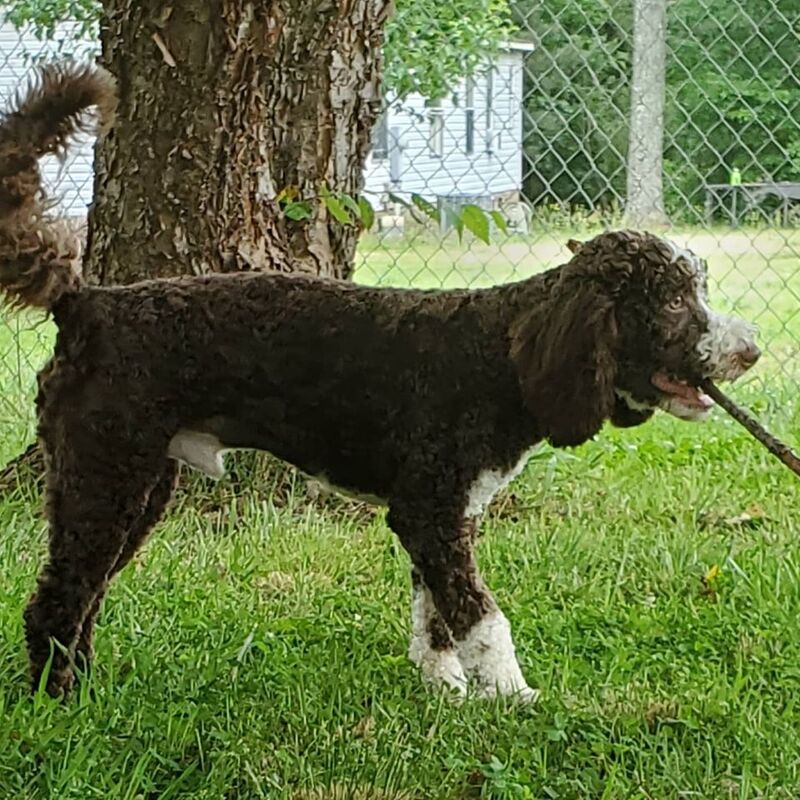 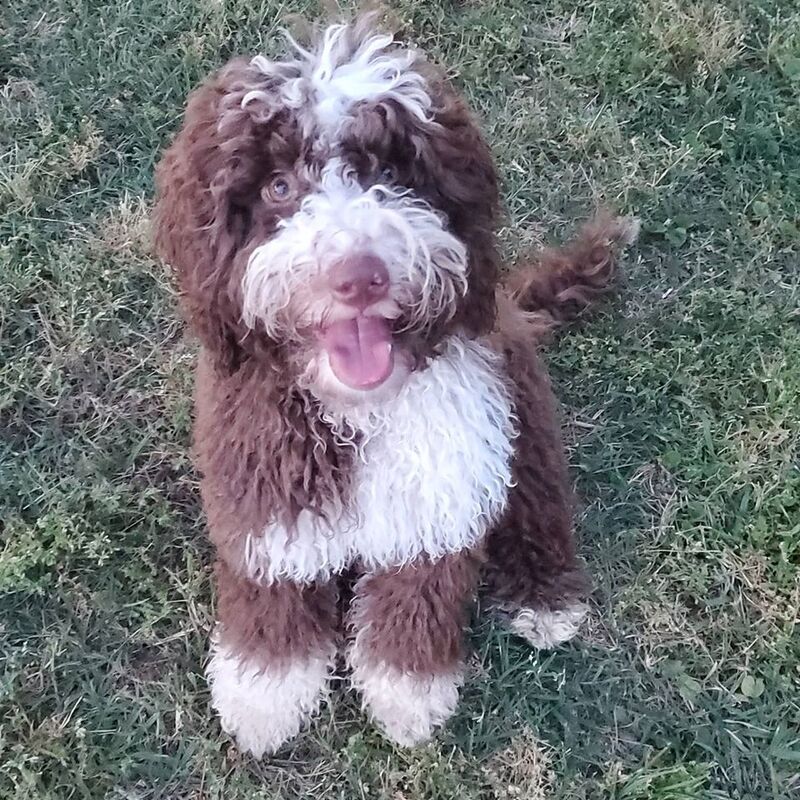 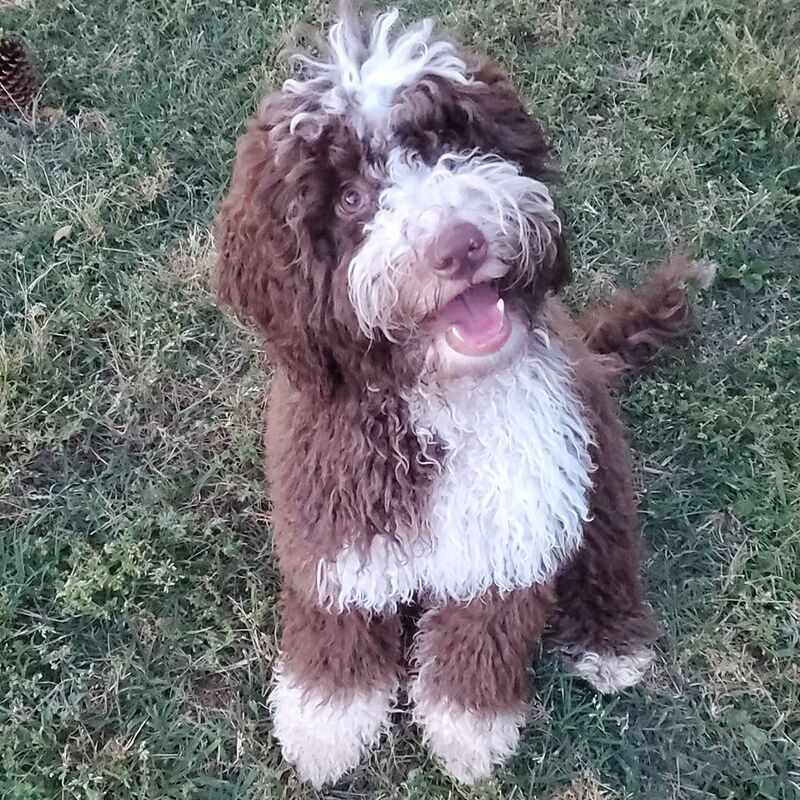 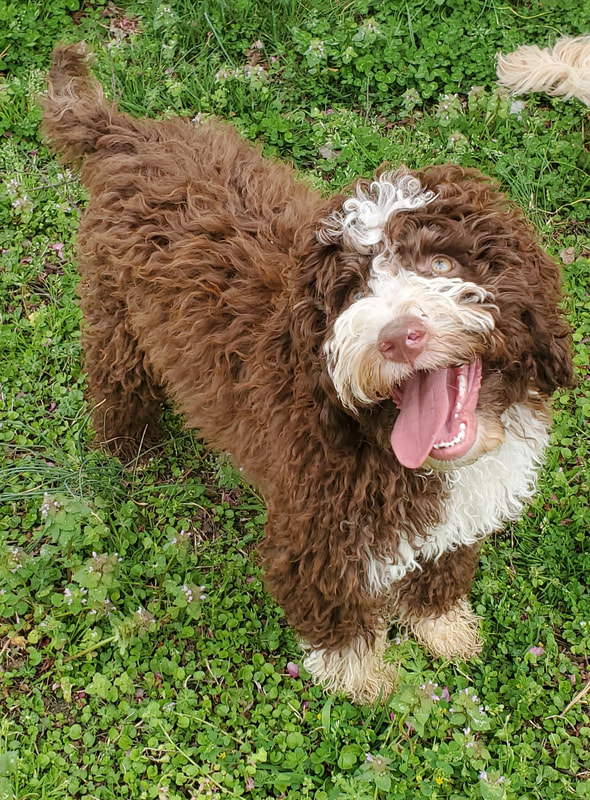 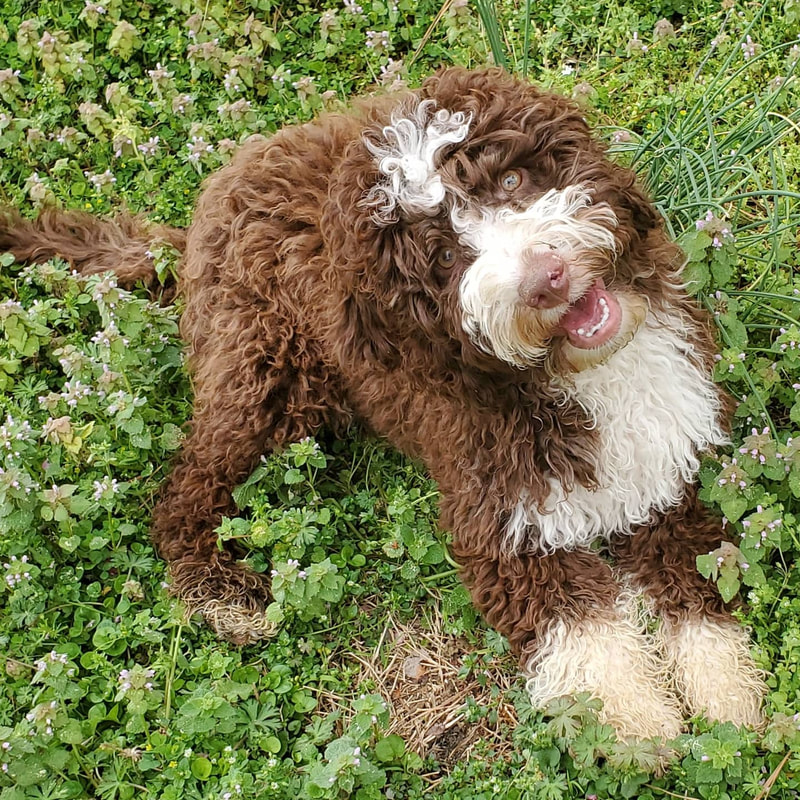 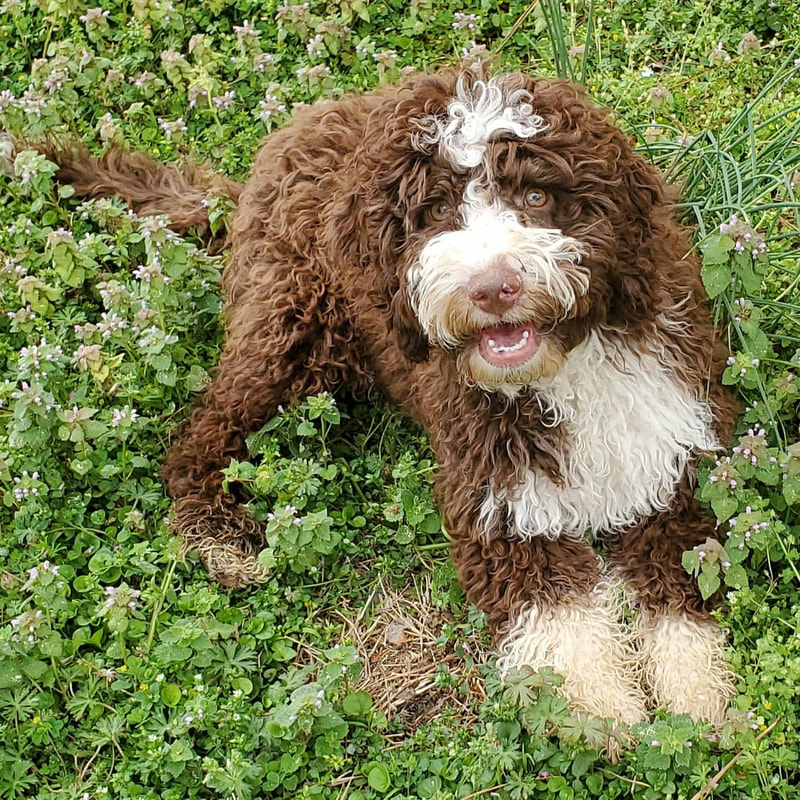 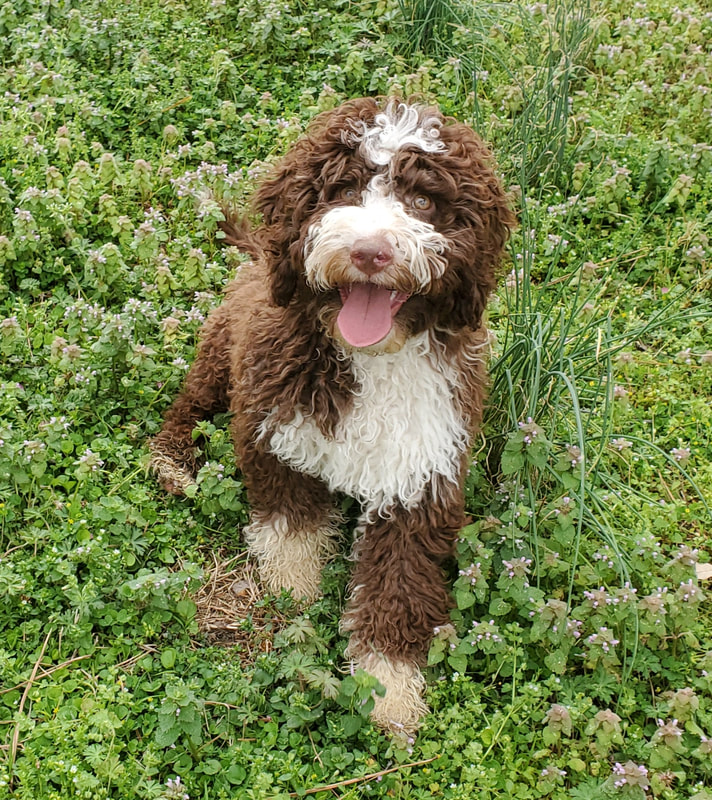 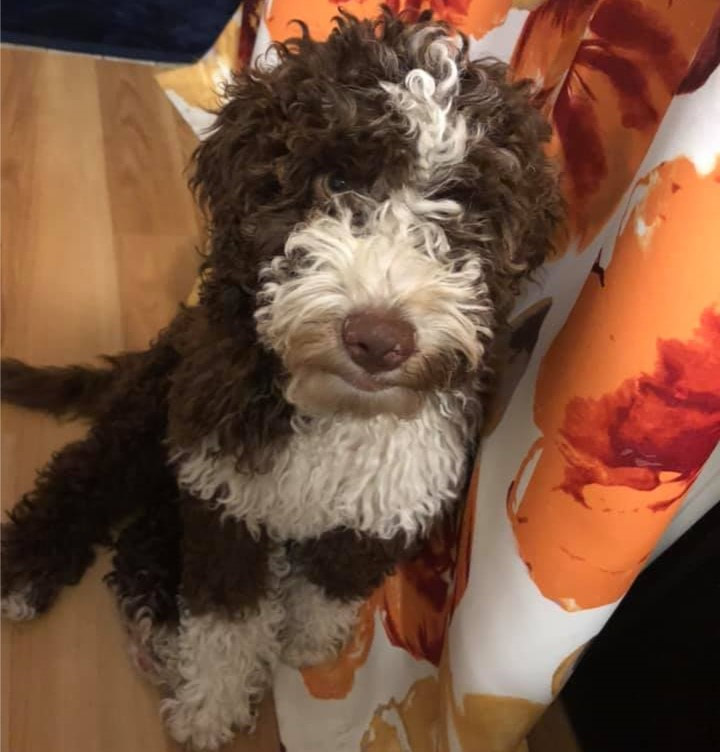 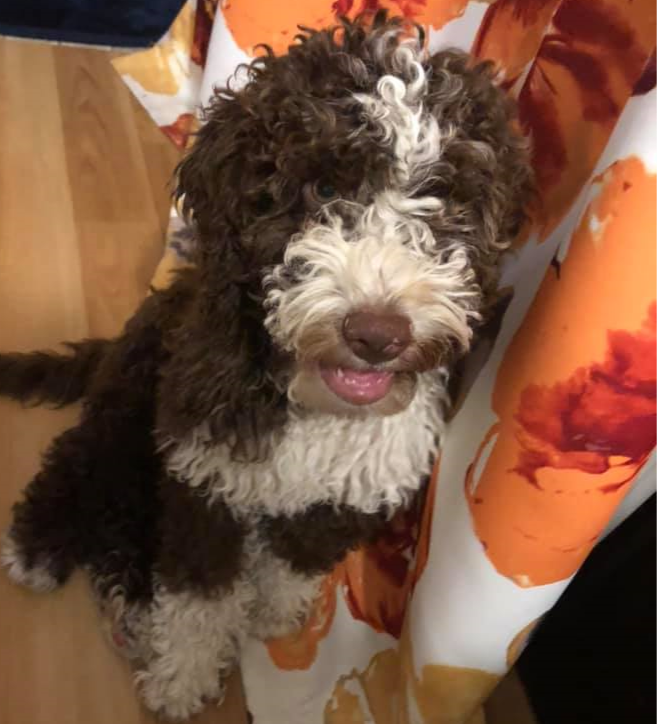 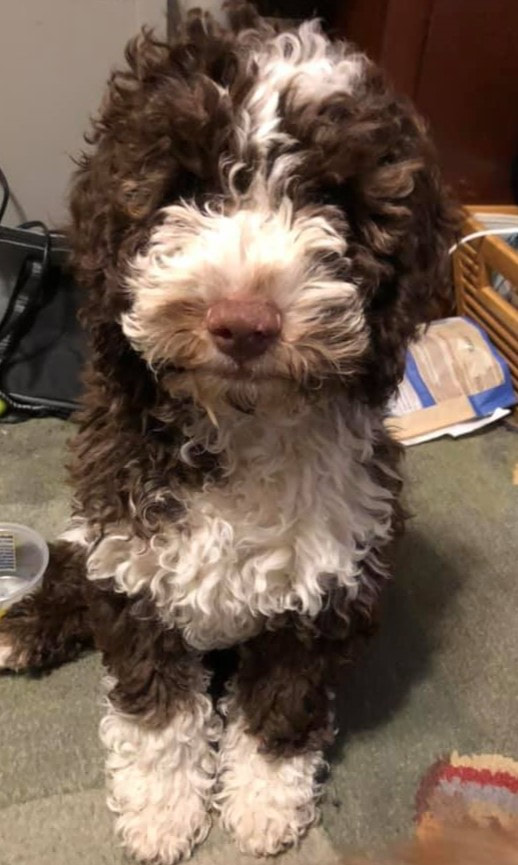 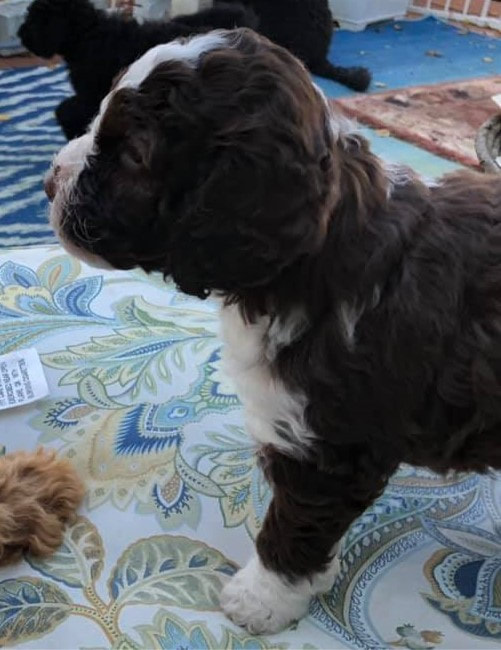 Jericho Skywalker's Photo Album
Belleauwood's Jericho Skywalker
Jericho is a chocolate and white parti Mutigenerational Australian Labradoodle.  He was born on October 31, 2020.  He is the only boy from Coco's 2019 Litter.  Jericho's maternal grandmother Emma is our original foundation female.  Emma is a borderline mini/small chocolate parti girl who is now retired and happily ruling the clan at Megan and Chris's house.  She is 13 but doesn't show her age at all.  Jericho's maternal grandfather is Malibu Beach, an absolutely stunning male we purchased to infuse top genetics into our breeding program.  Malibu descended from top show quality English Labrador Retrievers, hence the large head and broad shoulders that Jericho has.  From the moment of his birth, Jericho has been absolutely gorgeous and destined to a future as a stud male.  Jericho truly is what we have striven to breed for, and we look forward to him siring many puppies to carry on his genetics.  Jericho is a playful personality and very loving. Jericho lives in a Guardian Home near Wilmington.