Puppies are currently located in Myrtle Beach, Gastonia(Charlotte) and Wendell (Raleigh).  We can also arrange transportation to other areas including air shipping.

On our Homepage we feature our current litter of puppies ready for purchase. Check out Upcoming Litters page to see information about our upcoming litter and the waiting list. On the Our Dogs page you can find more information about the parents and our breeding program. Our contact information is available on the Contact page. Take a look at our Purchase a Puppy page for information about making about deposit or information about pricing. Our Puppies Supplies  has recommended puppy Supplies.  Prior Litters page has adult photos of the previous puppies as well as links to all the previous litters. Clicking on the gallery photos often makes them larger.  Thank you!
The price for our Labradoodles is $2,750 ​(Pet Pricing/$500 Deposit)
Check Our About page for why the pricing & our Purchase page for what the price includes.
For best response, please e-mail Megan at belleauwoodlabradoodles@gmail.com
Availability is updated within an hour of pickup.

Dorian is the smallest in the litter by a good amount.  He will likely be a mini/small medium.  He will likely be closer to 25 lbs.  He is getting a bit more independent every day and has a wonderful sweetness about him.  He is the sweetest natured puppy and is quite spunky and adventurous. He would do well in any household, including a single person household, but he will also do well with kids. 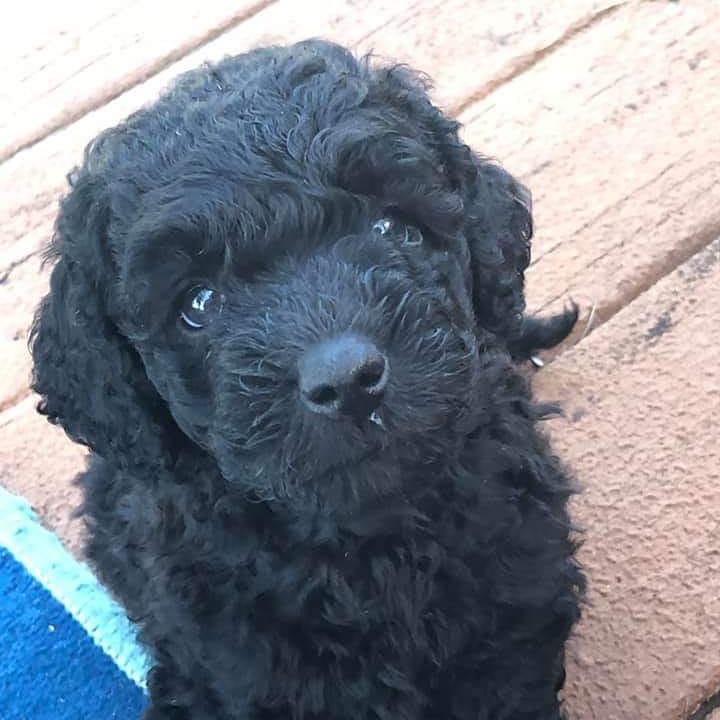 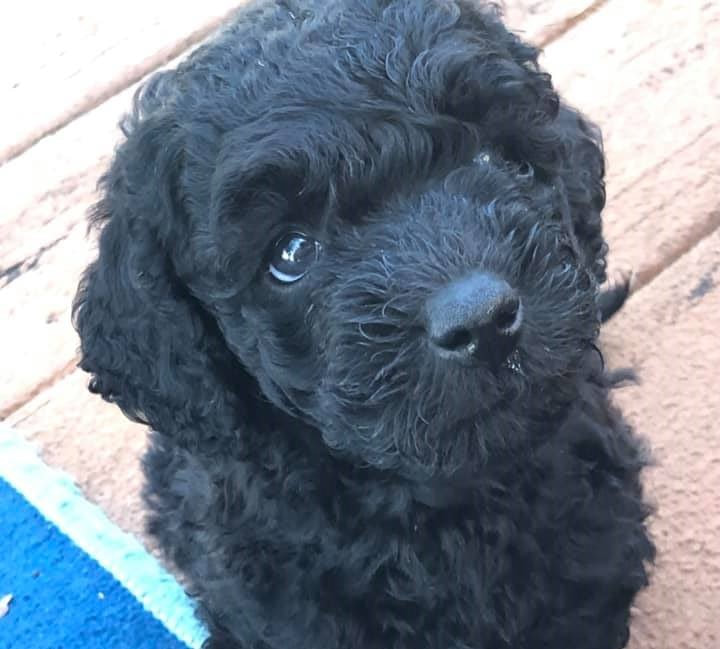 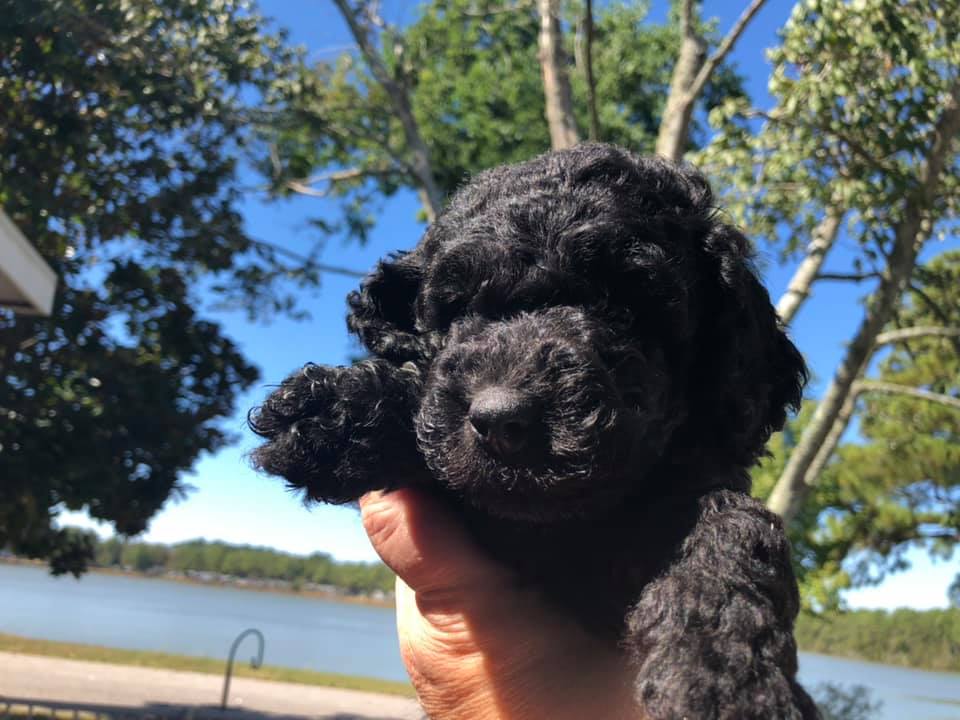 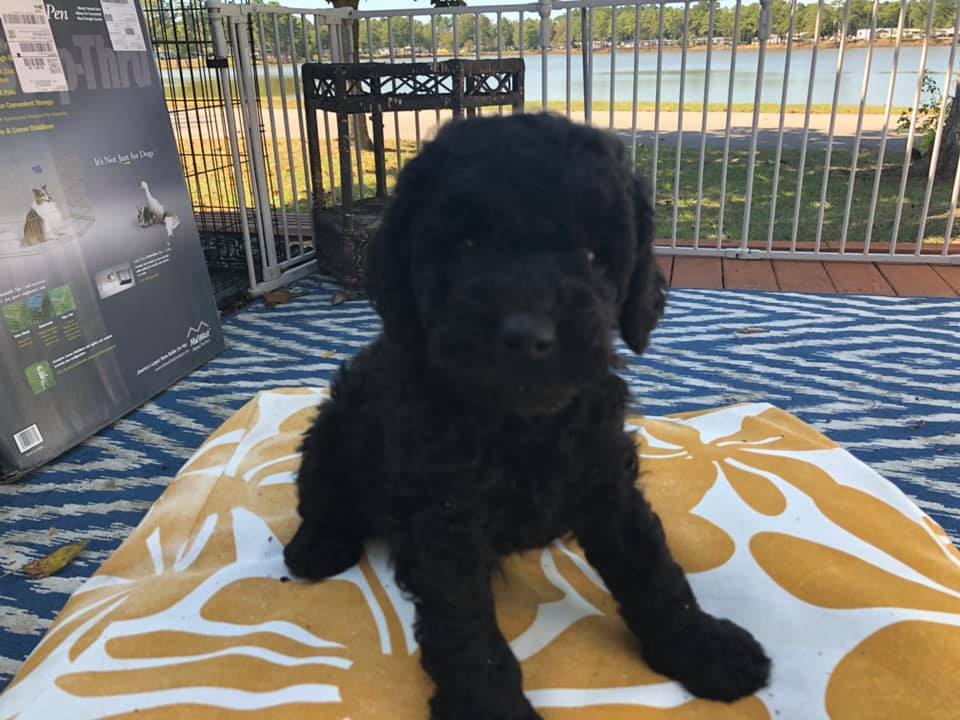 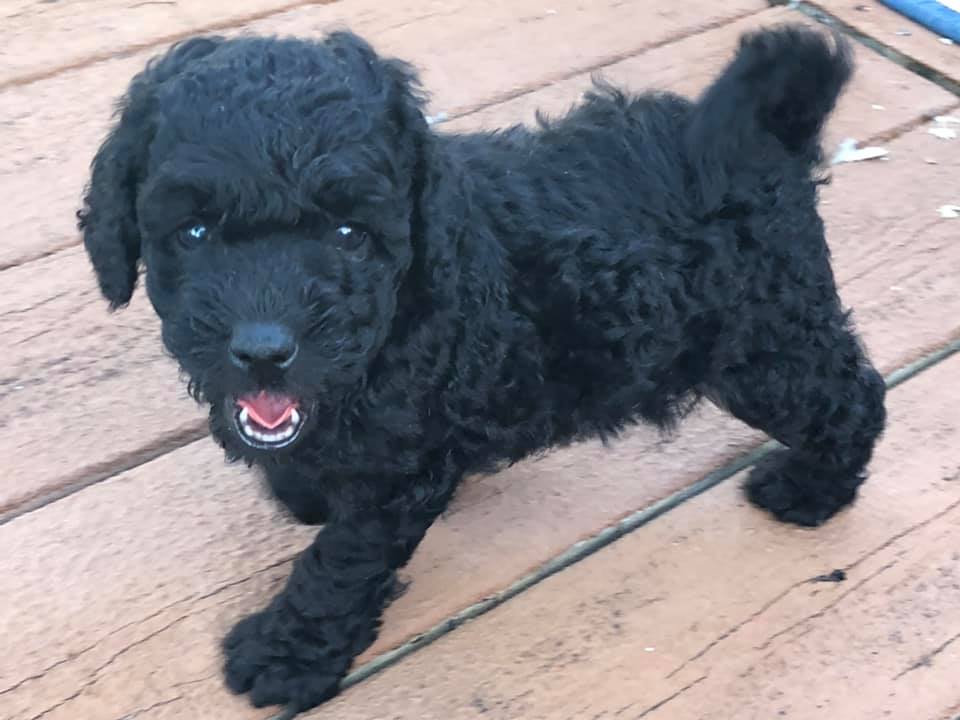 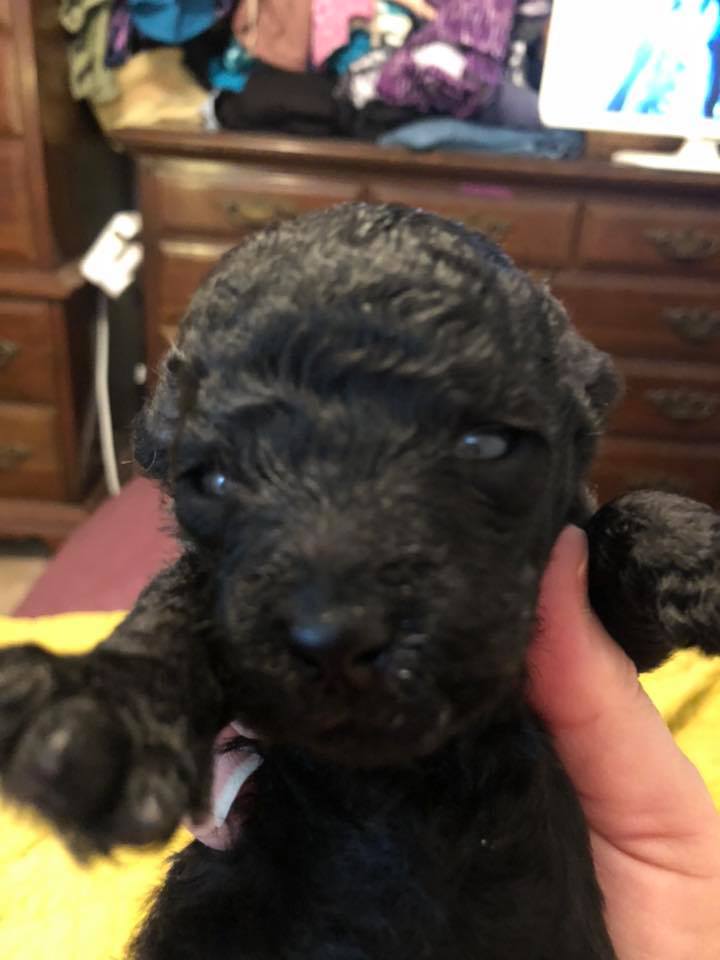 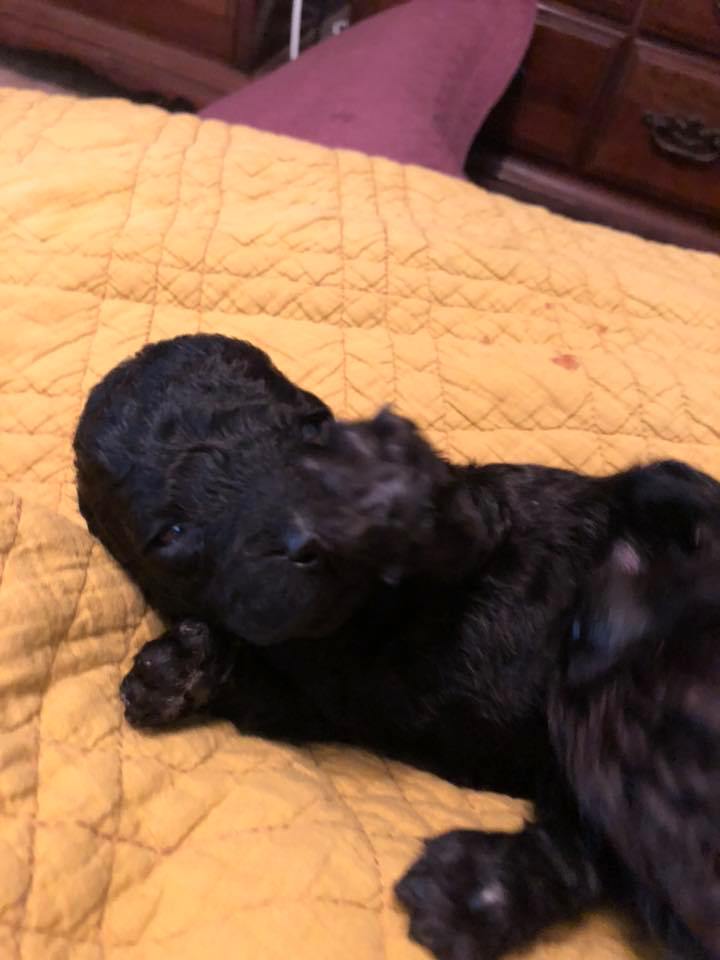 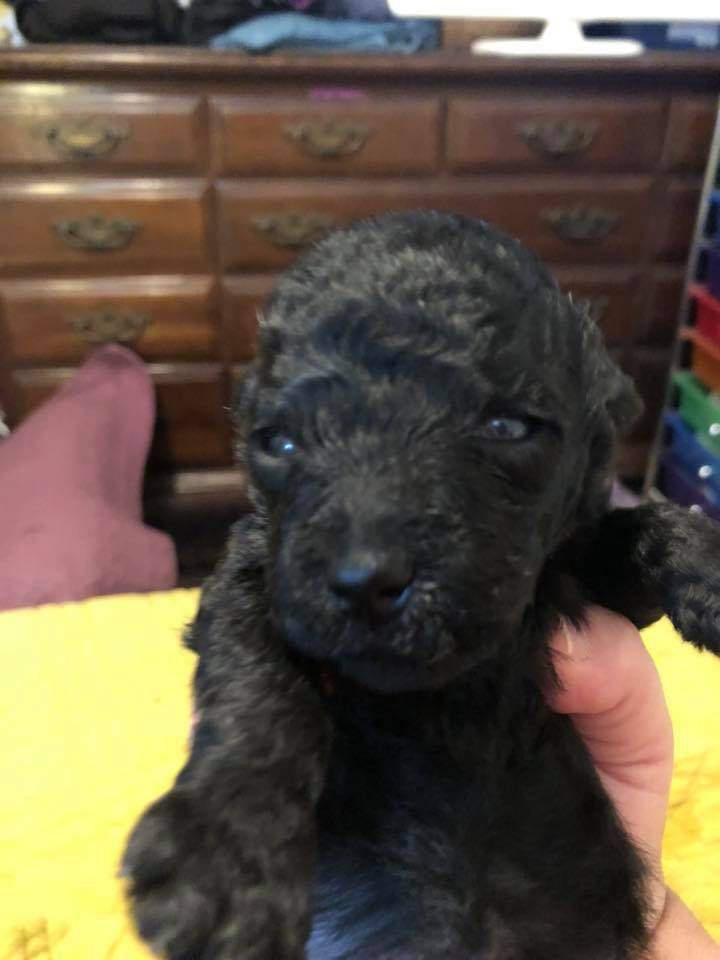 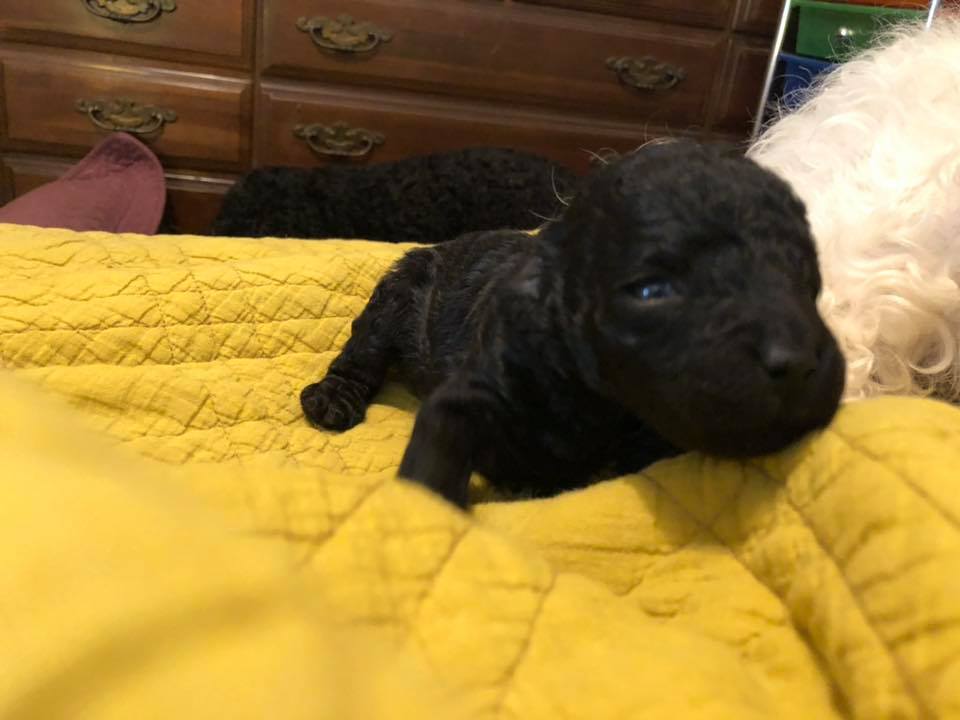 Florence is a mover and a shaker, a little more spunky and independent. She is adventurous and always on the go.  Being the only girl in the litter, she'll likely take on the role of keeping the boys in line.  She has amber eyes that are some of the prettiest of any puppy we have ever had.  She is very affectionate and a loving soul. 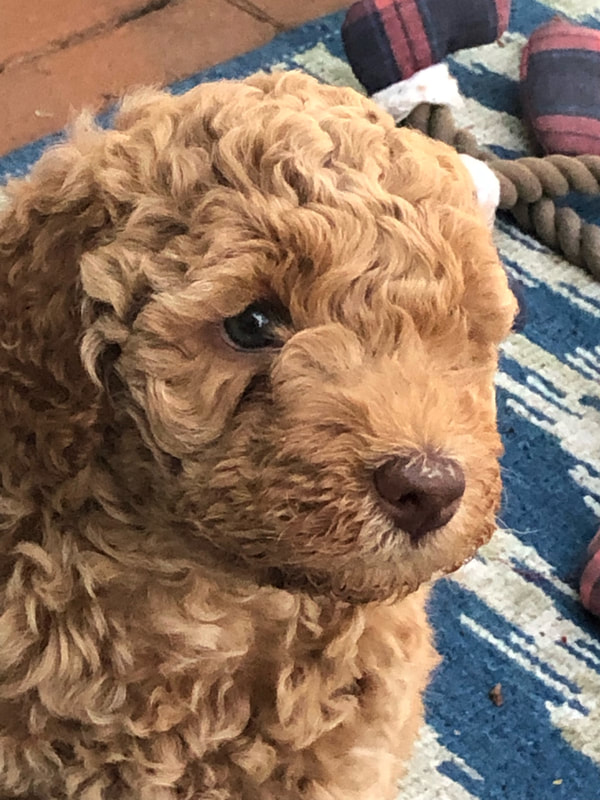 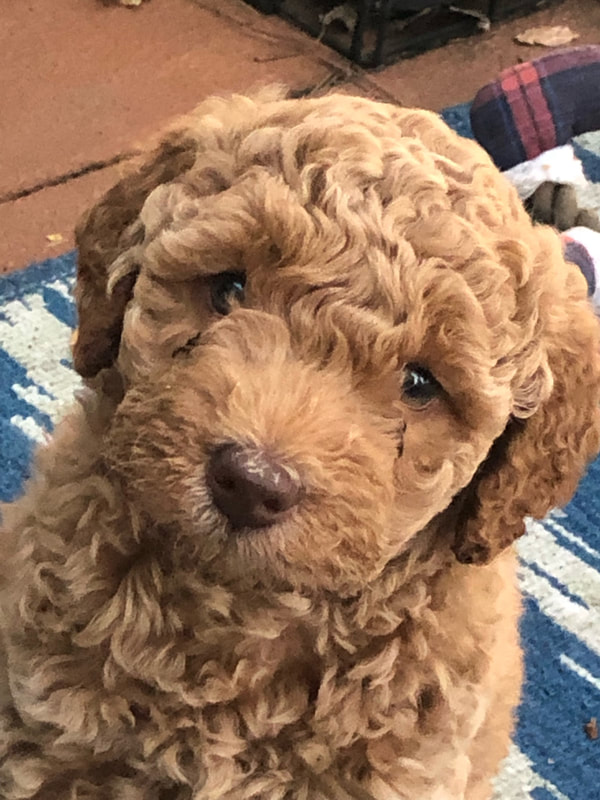 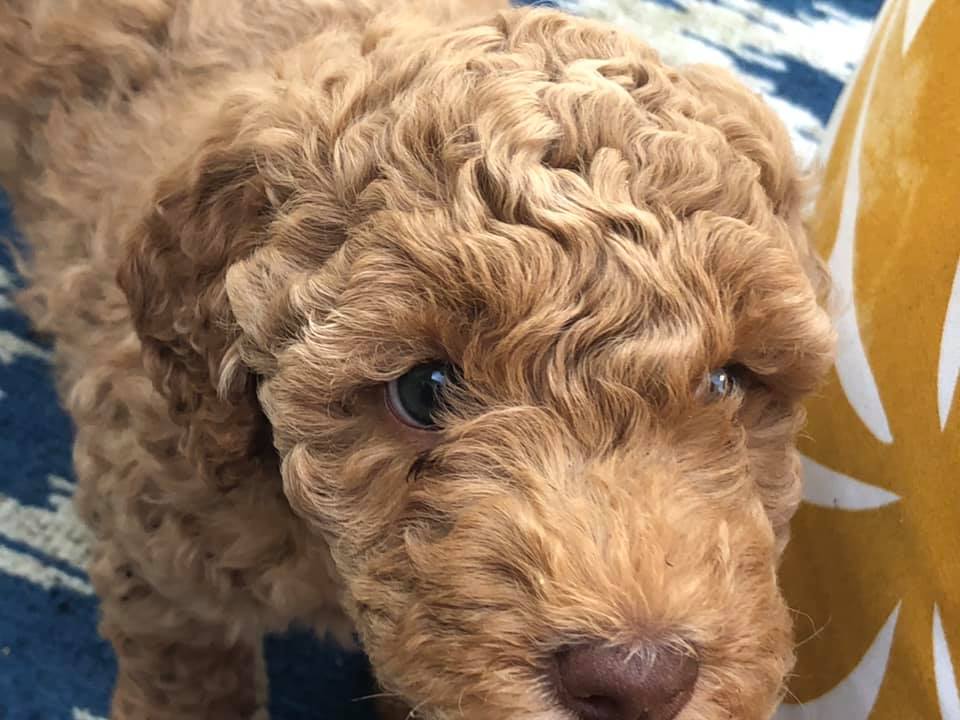 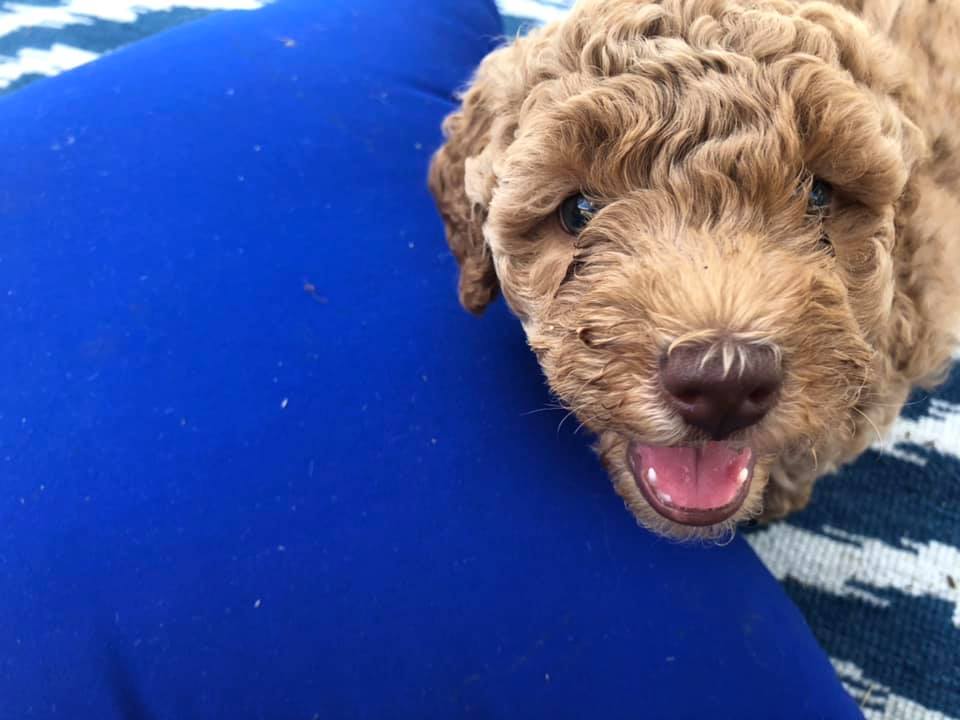 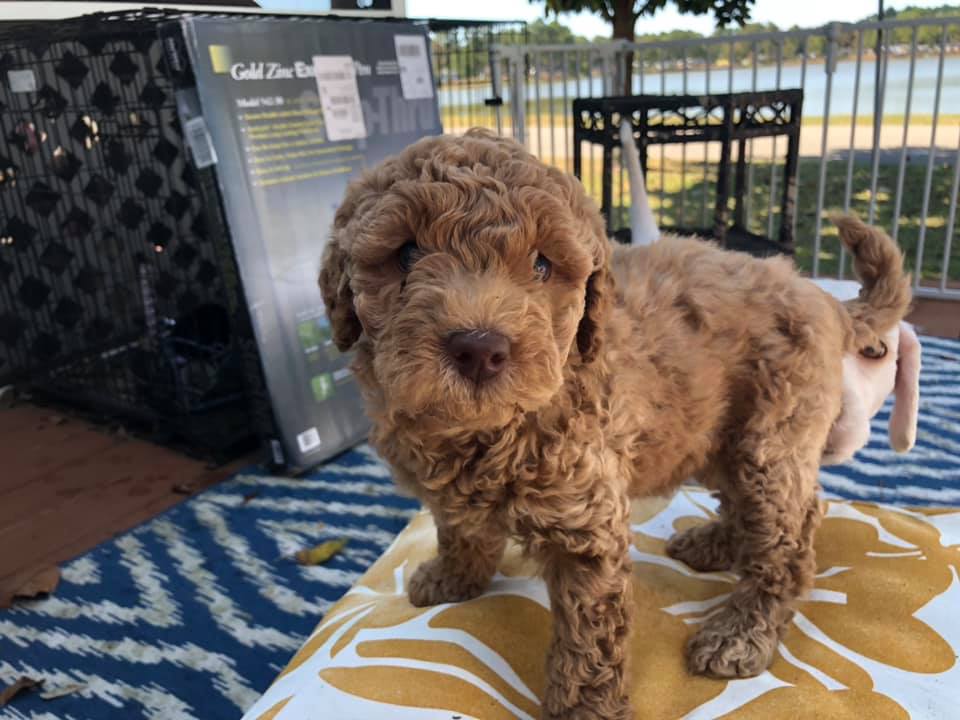 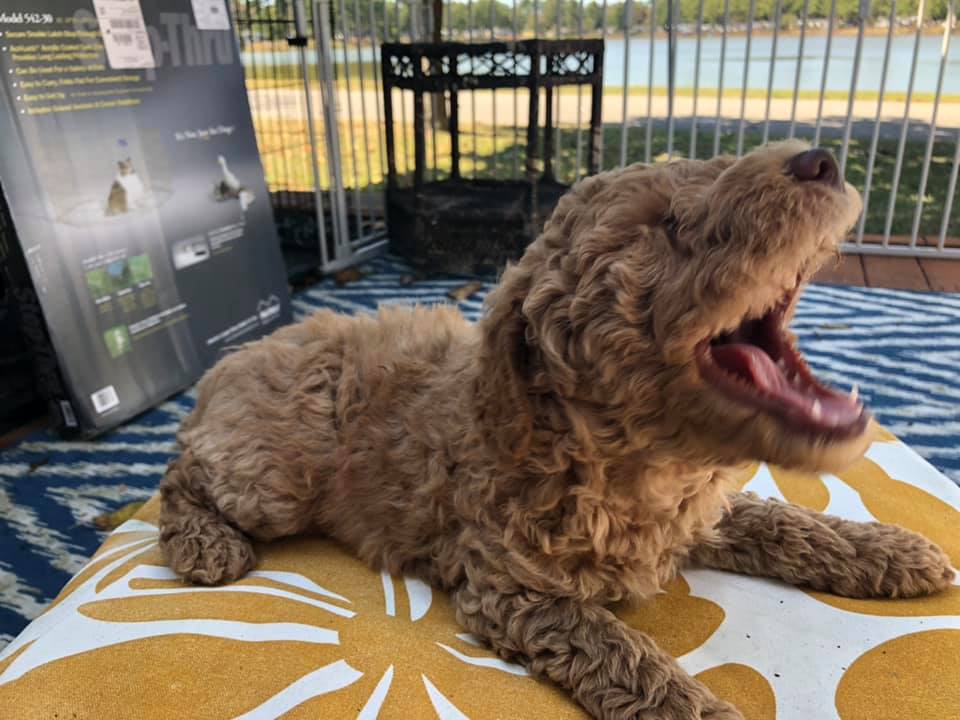 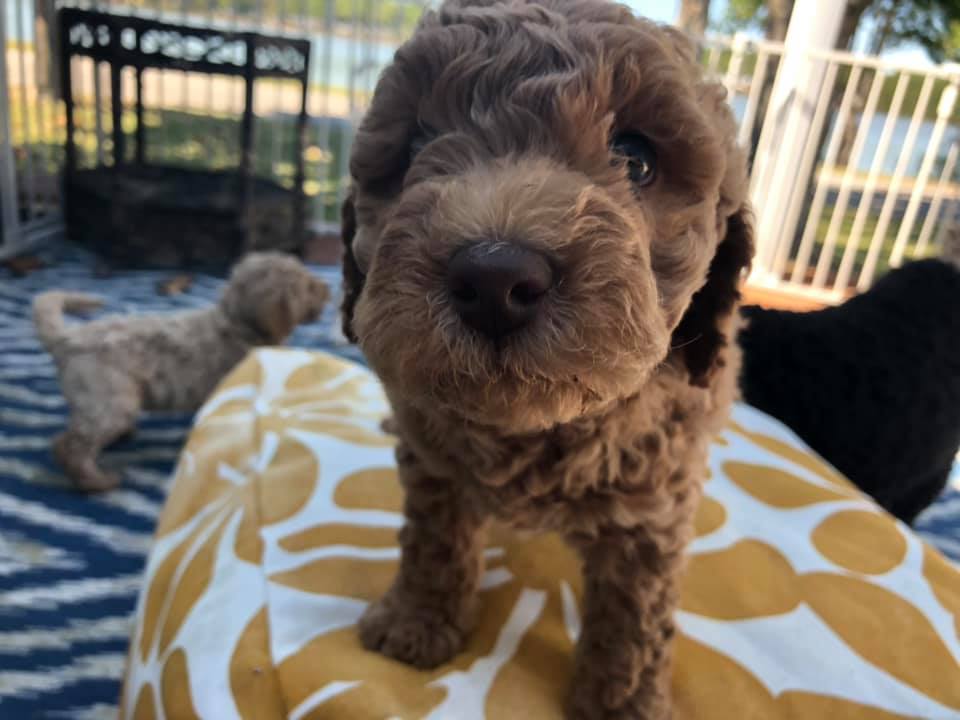 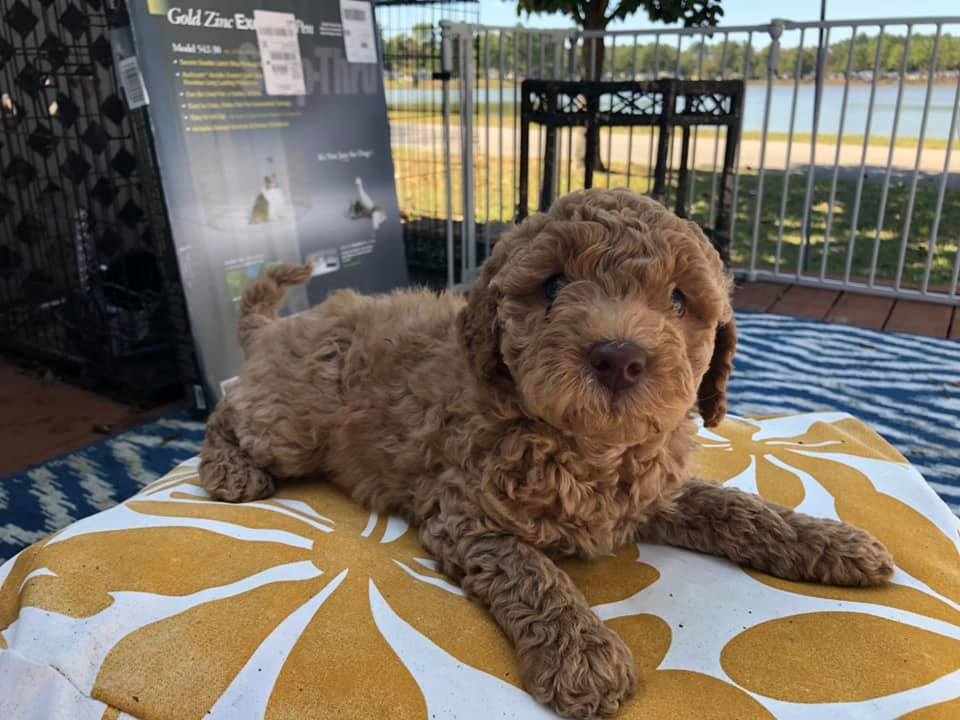 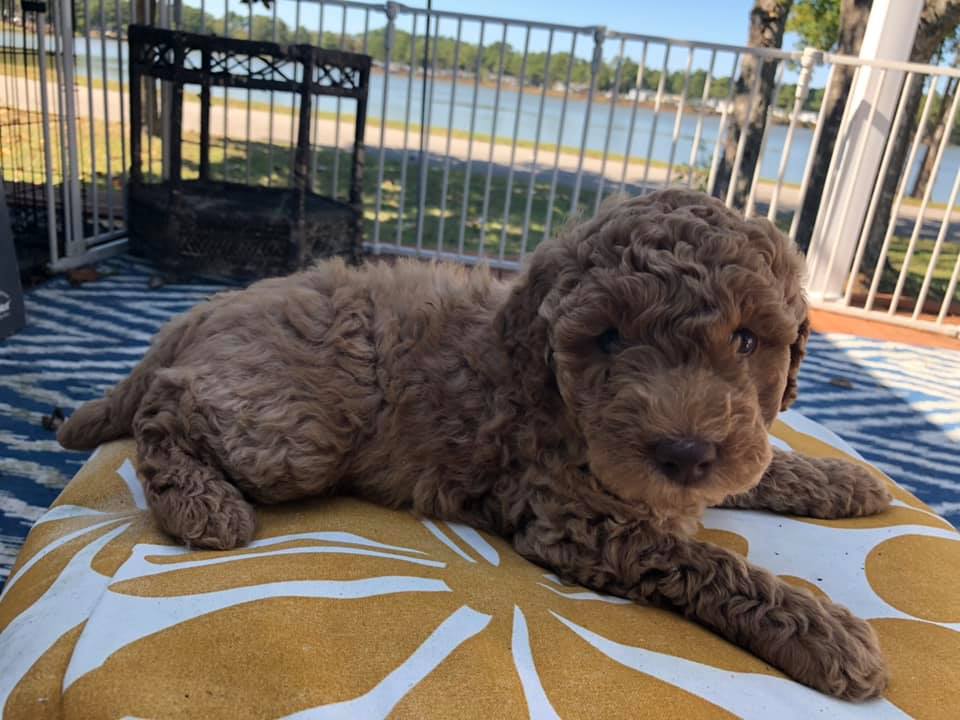 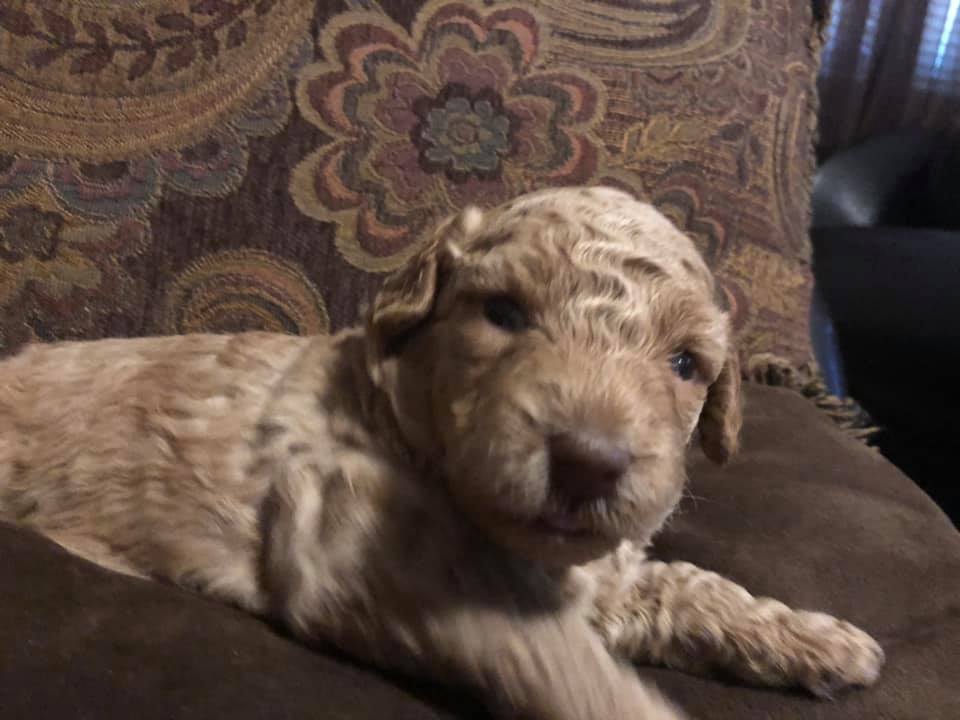 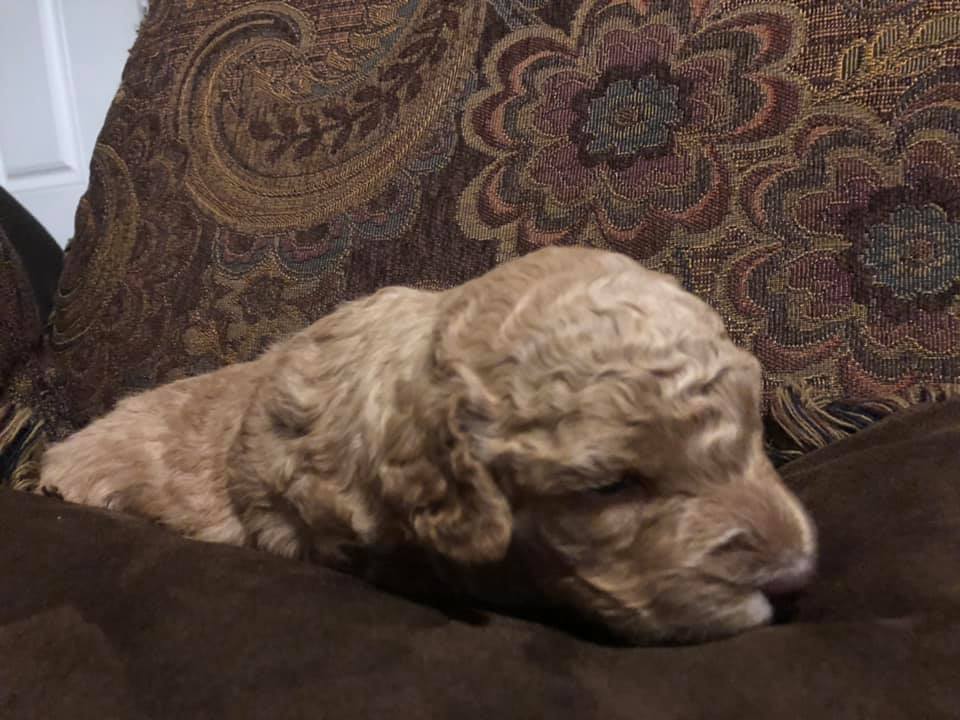 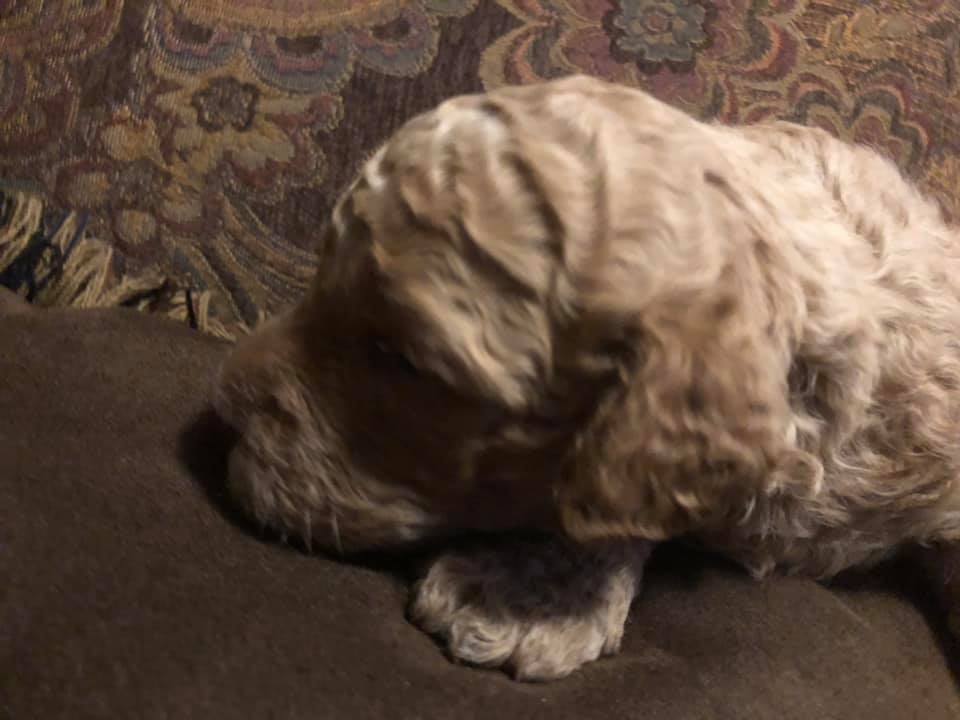 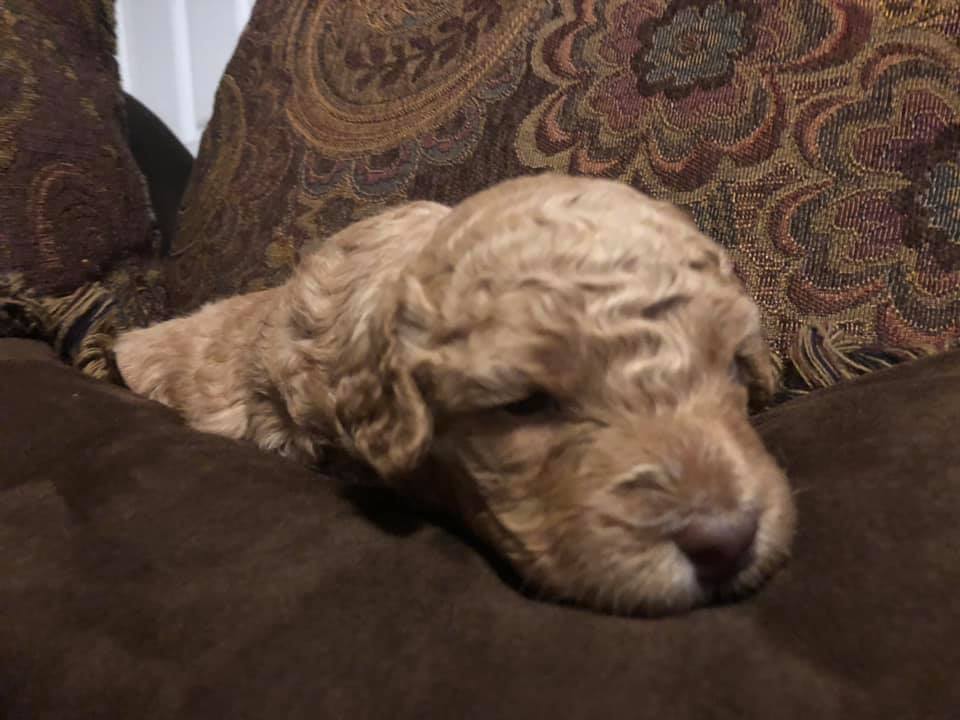 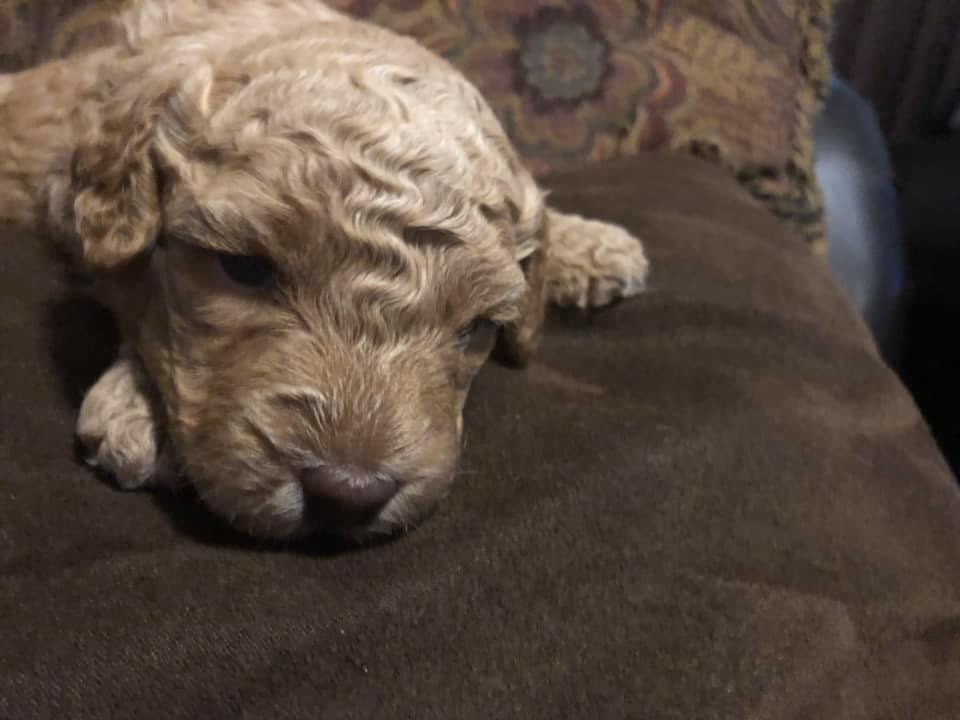 Matthew is a very calm boy with a stable personality that is good for a therapy home or family with kids.  He is very human-centric and affectionate.  He has a lot of love to give.  He will be a little on the larger side and I expect him to be in the high 30 pound range.  He has a big dog personality and demeanor. 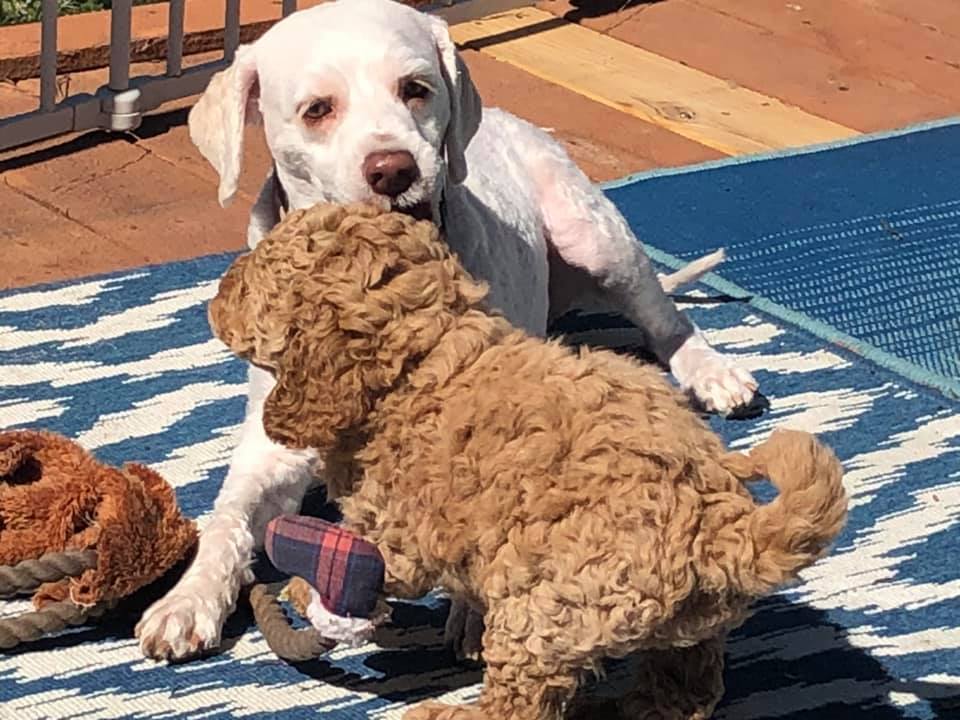 Kaitlyn is 2 1/2 years old.  She is an extremely loving and funny girl.  She is very active and LOVES going to the dog park.  She would do well in an active family with several kids to run around with.  She weighs just under 30 pounds.  She adores her humans and loves to travel.  She is always up for a car ride and does well in hotels.  Her mom, Lulu, is a chocolate and white parti, and we hope to produce parti puppies with Kaitlyn.  Contact us for a copy of our guardian contract for review if you are interested in this great girl.

Here are lots of pictures of her on our Facebook page (CLICK KAITLYN'S PHOTO ALBUM BELOW.  ​
Kaitlyn's Photo Album 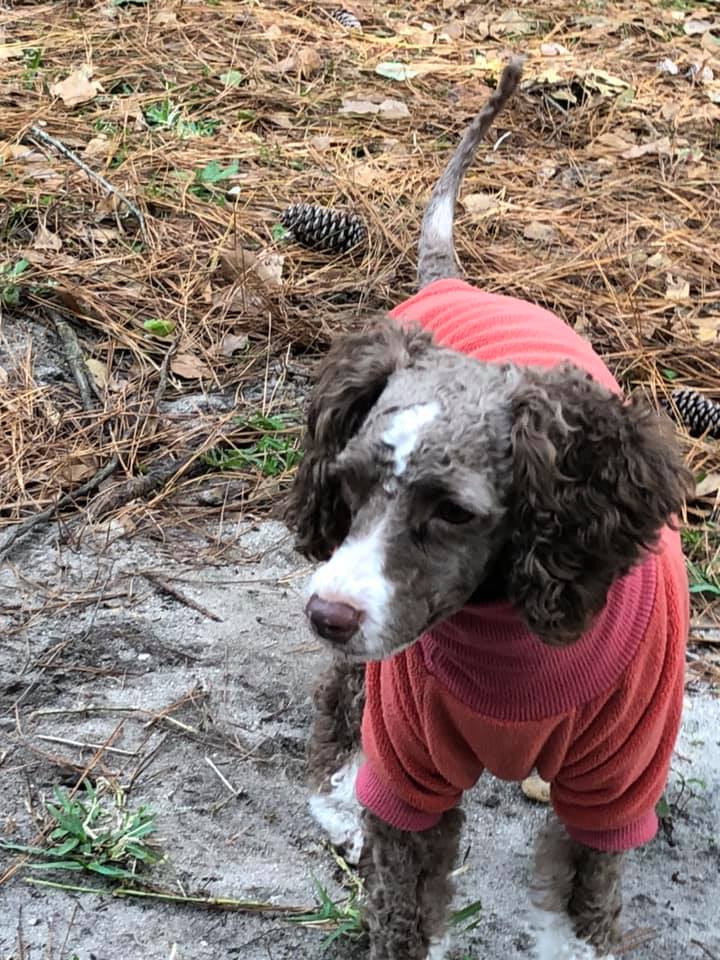 Little Ewok (we will change her name soon) is available for a guardian home.  She has perfect confirmation and may be the most mini genetics we have produced.  Her father is 17 pounds and her mother is 25 pounds.  She looks like she is going to be very petite.  She also carries both phantom and parti genetics.  We are looking forward to being able to offer true mini puppies from her in the future. 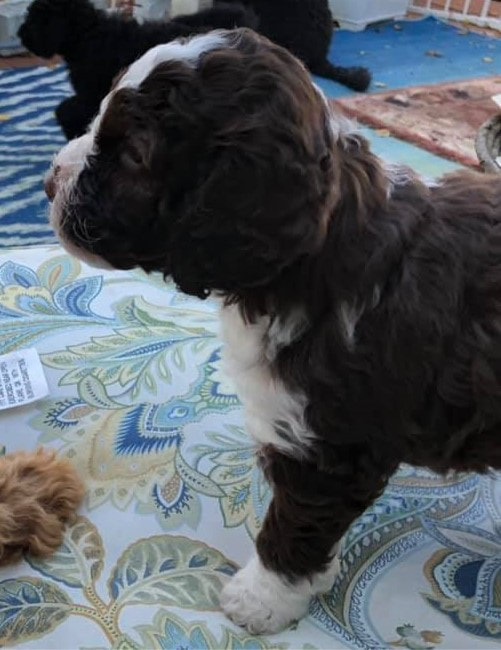 We recently retired our primary stud boy, BelleauWood's George Washington, after a very strong breeding career.  We kept 3 of George's daughters for the future of our breeding program.  We look forward to introducing a new male into our breeding program.  Jericho's maternal grandmother Emma is our original foundation female.  Emma is a borderline mini/small chocolate parti girl who is now retired and happily ruling the clan at Megan and Chris's house.  She is almost 13 but doesn't show her age at all.  Jericho's maternal grandfather is Malibu Beach, an absolutely stunning male we purchased to infuse top genetics into our breeding program.  Sadly, Malibu was stolen from us and we were not able to retain as much of his bloodlines as we had hoped to, but Jericho gives us the opportunity to re-introduce those bloodlines.  Malibu descended from top show quality English Labrador Retrievers, hence the large head and broad shoulders that Jericho has.  From the moment of his birth, Jericho has been absolutely gorgeous and destined to a future as a stud male.  Jericho truly is what we have strived to breed for, and we look forward to him siring many puppies to cary on his genetics.

Hugo is the lightest of the litter and the biggest in the litter.  He will likely take on the leader of the pack personality.  He is nice and calm.  Expect him to be closer to 35 lbs.

Vinton Valley's Black Eyed Susan - Suzie is a Multigenerational Australian Labradoodle from Vinton Valley Doodles in Florida.  Suzie is 29 pounds and has a fleece jet black coat.  Suzie has the sweetest temperament.  Suzie was born in 2012.  Suzie currently lives in the Myrtle Beach SC area with Erin.

﻿Evergreen Manor Annie Lee -  She has a light red wavy coat.  She was bred by Evergreen Manor Labradoodles of Newburg, Oregon. Annie Lee has multiple F3 labradoodles who were her great great great grandparents.  This makes Annie a 7th or 8th generation labradoodle.  Annie Lee weights 28 pounds and is miniature medium.   Annie Lee was born on 07/21/2012.  Annie had her first litter of puppies on 09/18/2015.  Annie Lee lives with Megan and Chris Moore in the Raleigh, NC area. Originally weighed 28 lbs.  At 7 years of age, and with yummy puppy food in the house, her weight on 08/05/2019 was 37 lbs.

Please visit our FaceBook Page
to watch videos and see photos of the puppies.
Visit Purchase a Puppy Page to find out more about buying a puppy or to place a deposit.